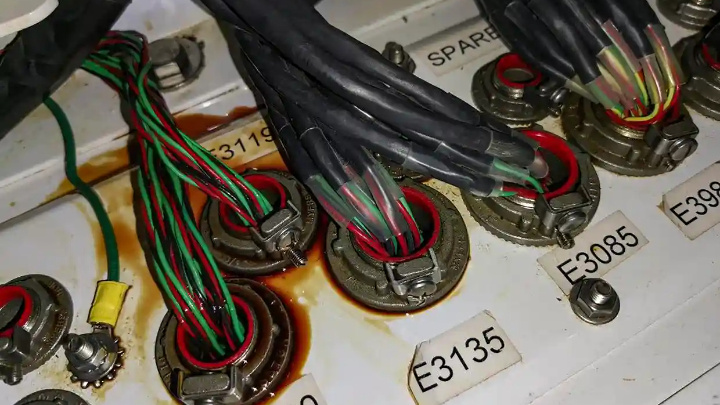 The oil leak that Gazprom says has caused it to extend the shutdown of gas supplies through its key Nord Stream 1 pipeline to Germany. Photograph: Russian Gazprom Press Service/EPA

Fears that Europe could be engulfed by a winter energy crisis reached new heights yesterday after the Russian energy supplier Gazprom extended the shutdown of gas flows it had imposed through its key Nord Stream 1 pipeline into Germany.

The seriousness of the situation is underlined by the fact that Russia kept gas supplies to Europe flowing even at the height of the Cold War. By contrast, the pipeline has now been shut down twice since the Russian invasion of Ukraine: for 10 days in July in addition to the current indefinite closure.

Gazprom said supplies would be halted indefinitely after a leak had been detected in the pipeline and would not restart until repairs had been fully implemented. The move came hours after G7 nations had agreed to impose a price cap on Russian oil in order to stem funds for Vladimir Putin’s regime and its invasion of Ukraine.

Flows through the pipeline – which stretches from the Russian coast near St Petersburg to north-eastern Germany and can carry up to 170m cubic metres of gas a day – had been due to resume yesterday after a three-day halt.

But hours before gas was due to be pumped, Gazprom published a photo of what it said was an oil leak on a piece of Nord Stream 1 equipment.

Siemens Energy, which supplies and maintains equipment at Nord Stream 1’s Portovaya compressor station, said on Friday the leak did not constitute a technical reason to stop gas flows, adding it could be sealed on site and was “within the scope of routine maintenance work”.

This view was backed by the German Federal Network agency in its daily gas situation report. “The defects alleged by the Russian side are not a technical reason for the halt of operations,” it said. The Kremlin has blamed western sanctions for disrupting Nord Stream 1 and putting barriers in the way of routine maintenance work, although officials in the west have rejected this claim.

Asked about the halt yesterday, Paolo Gentiloni, the European Union’s economic commissioner, said the EU expected Russia to respect energy contracts it has agreed. However, he insisted the union was still well prepared in the event of a total halt in Russian gas deliveries thanks to gas storage capacity and energy-saving measures.

“Gas storage is currently at about 80%, thanks to the diversification of supplies”, even if the situation varies from one country to another, added Gentiloni. “We are not afraid of Putin’s decisions; we are asking the Russians to respect contracts, but if they don’t, we are ready to react,” he told reporters.

Analysts also pointed out that the Russian move to extend its pipeline shutdown was made not long after Germany – which is heavily reliant on Russian gas – revealed its winter storage was expanding faster than expected, suggesting the move was made as a last opportunity to tighten the screw and to inflict maximum damage over winter. The German network regulator said the country’s gas supply was currently guaranteed but warned that the situation was tense and further deterioration could not be ruled out.

The tactics of Vladimir Putin have left the UK and Europe panicking, a former energy industry boss warned yesterday. Angela Knight, former chief executive of trade association Energy UK, said there had been too much dependence in the UK and Europe on energy provision from countries “not all that friendly”.

“We’ve had our energy policy wrong for a long, long time,” she told Times Radio yesterday.

However, Knight insisted that the UK could get through this winter. “It’s going to be difficult, it’s going to be pricey and there is going to have to be some assistance given to various groups of people and some assistance into industry,” she said, adding there was a “huge ability to reset a lot of our strategies and our policies”.