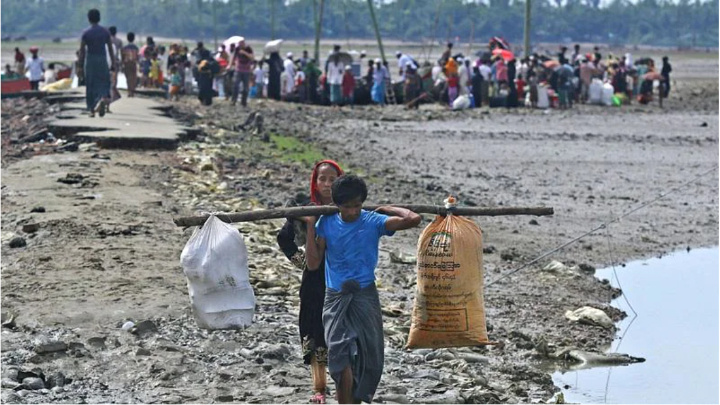 Rohingyas flee the violence-trodden Rakhine state in Myanmar. This picture was taken from Hariakhali area of Teknaf, Cox's Bazar

State minister for foreign affairs Md Shahriar Alam on Thursday said Bangladesh remains better prepared so that nobody can enter Bangladesh from Myanmar afresh due to the deteriorated situation in Rakhine State, reports news agency UNB.

"Our agencies are better prepared. BGB (Border Guard Bangladesh) has been instructed to remain vigilant,"

he told newspersons at his office at the Ministry of Foreign Affairs.

Shahriar, however, said they do not see any exodus like 2016 and 2017 though some people fear that the rest of Rohingyas will get into Bangladesh amid worsening situation on Myanmar side.

He said what is happening in Myanmar is an internal matter of Myanmar.

Shahriar said they are giving utmost importance to keep the border secure and ensure no impact inside Bangladesh due to the situation in Rakhine.

The state minister further said the Myanmar side was warned twice in August following mortar shells that landed in Bangladesh territory from Myanmar. Bangladesh lodged strong protests in this regard.

He said they did not want to prevent those (Rohingyas) in 2016-2017 on humanitarian grounds and prime minister Sheikh Hasina had given those shelters.

“But now we have some information which was not available at that time,” he said.

Responding to a question, the state minister said Bangladesh’s air space was not violated this time.

“We do not want to step into Myanmar's provocation or trap,” he said, adding that they (Myanmar side) might have a strategic benefit if they can move in such a unilateral direction.

Shahriar said the international community knows the true intention of Bangladesh and will keep the diplomatic community informed in advance so that they can understand the situation well if any untoward incident happens.

The state minister said the Myanmar side shows true intention to take back their citizens only when they face pressure from the international community.

He said Bangladesh got engaged with Myanmar twice virtually recently to discuss the repatriation issue.

Shahriar said the Myanmar side agreed to sit again soon and this time the meeting is likely to be held in-person.

The Ministry of Foreign Affairs on Monday summoned Myanmar Ambassador to Bangladesh, Aung Kyaw Moe, and lodged a strong protest against Myanmar’s mortar shells inside Bangladesh territory a day earlier.

"We have lodged a strong protest with Myanmar so that such incidents do not happen again. We have also strongly condemned the incident," foreign secretary Masud Bin Momen told newspersons at the Ministry of Foreign Affairs.