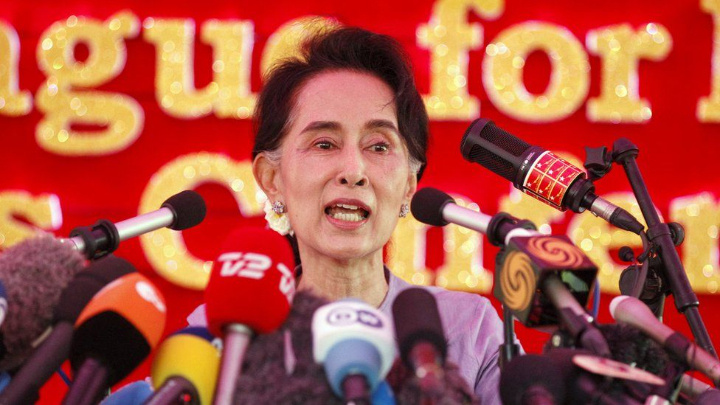 A military-run court in Myanmar has sentenced Aung San Suu Kyi to a further three years in prison on election fraud charges, her lawyers have told the BBC.

Ms Suu Kyi - the country's former leader - has now been sentenced to 20 years in prison on 11 counts, with several charges remaining.

She denies all of the accusations, and the trials have been condemned by rights groups as politically-motivated.

If convicted on all charges, she could face almost 200 years in prison.

The new sentence included hard labour, her lawyers said. The 77-year-old Nobel laureate has spent most of her time in detention under house arrest in the capital Nay Pyi Taw.

The public and media have had no access to the closed-door hearings and the military has prevented her lawyers from speaking to journalists.

The court found her guilty of committing fraud in the November 2020 general election, which her party, the National League for Democracy (NLD), won overwhelmingly.

The army launched a coup last year after alleging there had been massive voter fraud in the vote, but independent election observers said the poll was "representative of the will of the people".

Civil rights and democracy groups have denounced the legal proceedings against Ms Suu Kyi and others as a farce. The UN has said she is facing a "sham trial". Myanmar's military regime says Ms Suu Kyi's trials are part of the legal process.

A spokesperson for Amnesty International told the BBC that the military is using the legal system as "another convenient tool in its arsenal to smother dissent".

"The relentless legal assault on Aung San Suu Kyi is one of the better-known examples of how the military has weaponised the courts to bring politically motivated or farcical charges against opponents, critics and protesters," the spokesperson said.

Ms Suu Kyi - and many members of her party - are among more than 15,000 people who have been arrested by the junta since they seized power - 12,000 remain in prison, according to the Assistance Association for Political Prisoners (Burma).

On Friday, the UK's former ambassador to Myanmar and her husband were sentenced to one year in prison each for violating immigration laws. Vicky Bowman, who served as the UK's envoy in Myanmar from 2002 to 2006, and artist Htein Lin were arrested last week at their home in Yangon.