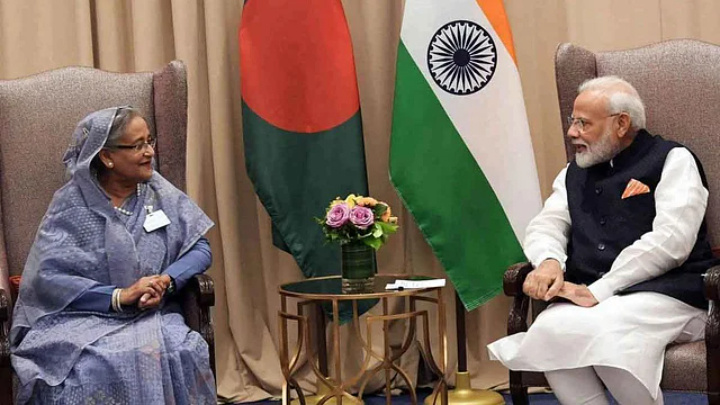 Cooperation in sharing the water of common rivers, increasing trade and commerce, and ensuring the supply of energy and essential commodities are among the issues to be prioritized during the forthcoming India visit of prime minister Sheikh Hasina. Mutual cooperation will also be given importance in order to keep up the special dimension that has developed in the relations between the two countries over the past decade.

Prime minister Sheikh Hasina will be arriving in India on 5 September on a five-day state visit. The next day she will join a summit meeting with Indian prime minister Narendra Modi at Hyderabad House in Delhi. Preparation is on for several memorandums of understanding to be signed at the end of the discussions between representatives of both sides.

Speaking to Prothom Alo, senior officials of the foreign ministry have said alongside bilateral issues, the meeting between the two leaders may also touch upon regional and global issues. The discussions may touch upon strengthening sub-regional cooperation, Sri Lanka’s economic downfall in the South Asian context, and the situation in Afghanistan after the withdrawal of the US troops. Bangladesh will raise the issue of possible security threats in the region if the Rohingya crisis is extended. The two countries will also discuss the impact of the Russia-Ukraine war. The matter of the recent US-China competition in the geopolitical context may also arise in the discussions.

Secretary (East) of the foreign ministry, Mashfi Binte Shams, speaking to Prothom Alo, said that all issues of bilateral interest are discussed during talks between the top leaders of two neighboring countries. However, the issues of trade, energy, water sharing, connectivity, and defense cooperation are likely to be given importance at these talks.

Bangladesh and India have decided to sign the Comprehensive Economic Partnership Agreement (CEPA) to strengthen their economic cooperation. The two countries are to discuss the start of this agreement and a declaration may be made n this regard at the end of the talks between the two prime ministers.

President of the Bangladesh Economic Institute (BEI) and former ambassador Humayun Kabir, speaking to Prothom Alo, said, “Bangladesh and India have decided to sign CEPA. It is necessary to ensure that the agreement is balanced in the interests of both sides and brings benefits to the two countries. There is a general perception that we give more to India than we get, so this agreement will not be sustainable if it is one-sided.”

According to diplomatic sources, during the Covid outbreak, India kept up an uninterrupted supply of commodities by means of railway transportation. India has now proposed that Bangladesh informs them in advance about their requirements for the import of rice, wheat, onions, and other essentials. India will give consideration to Bangladesh’s needs after meeting its own demands. The matter may be given importance during the talks between the two leaders.

Bangladesh is paying attention to long-term energy cooperation with India. While there is a global energy crisis, India is in a good position.

As always, Bangladesh will raise the Teesta issue at this meeting too. It will also raise the issue of a framework for an MOU on the sharing of waters of the rivers Monu, Muhuri, Khoai, Gomti, Dharala, and Dudhkumar. The issue of water sharing on a priority basis of eight more rivers had been discussed on 25 August at the minster level talks of the Joint Rivers Commission. This will be discussed at the summit meeting.

After the talks between the two prime ministers, an MOU may be signed on the withdrawal of water from the river Kushiara for irrigation. A joint survey for the proper use of the Ganges waters may also be announced for the meeting.

Border killings and peaceful border management always feature prominently during talks at any level between the two countries. Border killings have decreased over the past few months. A senior Bangladesh official has said that Bangladesh will stress a complete halt to the killing of unarmed persons at the border. The matter of integrated border management to prevent human trafficking, drug trade and all sorts of smuggling may also be discussed.

Use of defense loan

A defense deal was signed between the two countries during prime minister Sheikh Hasina’s Delhi visit in April 2017. India at the time announced it would extend USD 500 million to Bangladesh for the defense sector under a loan agreement in this regard. Five years have passed since then, and Bangladesh has not utilized the loan appropriately.

Defense talks took place in Delhi between the two countries at the beginning of August this year. The matter of using the USD500 million, joint arms manufacturing, and other issues of cooperation were discussed at the time.

Speaking to this correspondent, a concerned official said progress had been made in the utilization of the loan agreement funds after the talks in Delhi and an inspection of the arms manufacturing establishment by a Bangladesh delegation. Defense cooperation may also feature in the talks between the two prime ministers.

Since 2009, India has been providing stipends under a special program to the offspring of freedom fighters. To honor the Indian nationals who took part in the war of liberation, during her Delhi visit prime minister Sheikh Hasina will announce a stipend under the name of Mujib Scholarship for War Veterans’ Families. The scholarship is scheduled to be handed over to some of the recipients at an event on 7 September in Delhi.

A senior official of the foreign ministry said that initially this scholarship will be proffered to 200 students, 100 students at the secondary level, and 100 at the higher secondary level. Each student will be given a one-time down payment of 500 dollars to 1000 dollars.

The Delhi-based Energy and Resources Institute (TERI) will award prime minister Sheikh Hasina in recognition of her leadership in sustainable development. This institute was formerly the Tata Energy Research Institute.

According to the draft schedule of the visit, prime minister Sheikh Hasina will reach Delhi in the first half of the day on 5 September. India foreign minister S Jaishankar will pay a courtesy call upon her in the evening that day.

On 6 September morning, Sheikh Hasina will be given a guard of honor at the Rashtrapati Bhavan. She will then go to Rajghat to offer her respects to the memory of Mahatma Gandhi. After that, prime minister Sheikh Hasina and Narendra Modi will hold talks at the Hyderabad House in Delhi on a one-too-n level as well as at a representative level. After that, the enlisted MOUs will be signed in presence of the two prime ministers.

On 7 September prime minister Sheikh Hasina will address a meeting of India’s top businesspersons. In the afternoon she will travel from Delhi to Rajasthan. She will visit the dargah at Ajmer Sharif and offer prayers there. On 8 September morning, she will return to Dhaka.

Speaking to Prothom Alo about the prime minister’s Delhi visit, former ambassador Humayun Kabir said that as close neighbors, Bangladesh and India need each other. In consideration of future relations, it is important to ensure that the various issues of cooperation are beneficial for both sides.