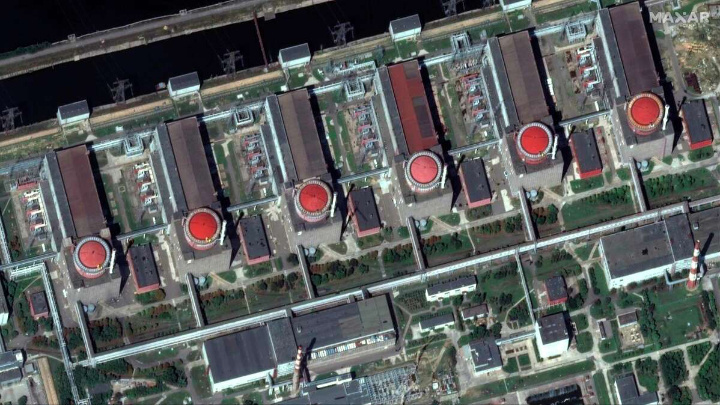 The UN nuclear agency renewed its request Tuesday to assess the safety and security at Europe’s largest nuclear plant in southeastern Ukraine which Russia and Ukraine accuse each other of shelling, sparking warnings of a possible nuclear catastrophe.

UN political chief Rosemary DiCarlo announced at the start of an emergency meeting of the UN Security Council on the situation at the Zaporizhzhia nuclear plant that Rafael Grossi, director general of the International Atomic Energy Agency, requested to send an IAEA mission “to carry out essential safety, security and safeguard activities at the site.”

“Preparations for the mission are proceeding and the IAEA is in active consultations with all parties regarding its efforts to send such a mission as soon as possible,” DiCarlo said. “We welcome Ukraine and Russia’s recent statements indicating support for the IAEA’s aim to send a mission to the plant, which would be the IAEA’s first to that site since the start of the war.”

Grossi said in a statement that “the mission is expected to take place within the next few days if ongoing negotiations succeed.”

DiCarlo said the UN has the logistics and security capacity in Ukraine “to support any IAEA mission to the plant from Kyiv, provided Ukraine and Russia agree.”

The Zaporizhzhia plant has been under the control of Russian forces since early March, soon after their invasion of Ukraine. Technical experts from Ukraine continue to operate the nuclear equipment.

DiCarlo called the situation in and around the plant “dangerous” and warned that if the almost daily reports “of alarming incidents involving the plant” continue or escalate, “we could face a disaster.”

Russia’s UN Ambassador Vassily Nebenzia told the council that since its last meeting on the operation of Zaporizhzhia about two weeks ago, “the nuclear safety situation has further deteriorated.”

“The armed forces of Ukraine continue basically every day to shell the territory of the nuclear power plant and the town of Enerhodar and this creates a real risk of a radiation accident,” he said.

“We expect that the IAEA trip mission will take place in the very near future and the agency experts will confirm the real situation at the station,” Nebenzia said. “We stand ready to extend maximum support possible to resolve all organizational issues.”

Ukraine’s UN Ambassador Sergiy Kyslytsya welcomed the readiness of the IAEA’s Grossi to send a mission to Zaporizhzhia. He said earlier Tuesday Foreign Minister Dmytro Kuleba responded to Grossi's letter with the proposed IAEA itinerary saying it is in compliance with Ukrainian legislation “and in general might be accepted.”

“Further arrangements are to be made based on the security conditions and require communication of detailed route plans and other logistical aspects as soon as possible,” Kyslytsya said.

Kyslytsya stressed that Ukraine would like to see the IAEA mission bolstered by incorporating “military and political components,” and having IAEA experts remain at the plant until it is returned to Ukraine.

He also reiterated Ukraine’s demand for Russian troops to withdraw from Zaporizhzhia and for a demilitarized zone around the plant.

After last week’s high-level meeting in the western Ukrainian city of Lviv involving UN Secretary-General Antonio Guterres and the presidents of Ukraine and Turkey, it appeared progress had been made on an IAEA mission to the plant. But there had been no sign of progress until DiCarlo’s announcement.

DiCarlo told the council that the UN chief had discussed the issue of the plant’s safety during a phone call with Russian Defense Minister Sergei Shoigu on Aug. 15, and with Ukraine’s President Volodymyr Zelenskyy during the Aug. 18 Lviv meeting.

The Russian and Ukrainian ambassadors accused each other’s country of responsibility for the attacks in an around Zaporizhzhia.

Nebenzia accused Ukraine of “using nuclear blackmail” by shelling the plant and called Western proposals for Russian forces to withdraw and to create a demilitarized zone “irresponsible.” He said they don't take into account the need for the safe functioning of the plant.

Addressing Western members of the council, he said: “Once again, we appeal to you to stop covering up what your Kyiv protegees are doing and compel them to stop attacking the Zaporizhzhia (plant) which is fraught with risk of accident and radioactive contamination of European countries.”

He insisted that Russia has no heavy weapons at the plant, and that a “disaster” has been avoided because of the “smooth joint work” between the Ukrainian workers, fire squads, emergency people and Russian military.

Ukraine’s Kyslytsya said Russia needs Zaporizhzhia to “wage war” against his country and accused Moscow of “turning the issue of nuclear safety at the facility into a farce, a circus.”

“Nobody who is at least conscious can imagine that Ukraine would target a nuclear power plant at tremendous risk of nuclear catastrophe and on its own territory,” he said. “Such a catastrophe would lead to many deaths and pollution for many years to come.”

Kyslytsya said Russia also needs the plant “for propaganda purposes because the de-occupation of the plant will mean a failure of Putin’s campaign in the south of Ukraine.”
Hindustan Times