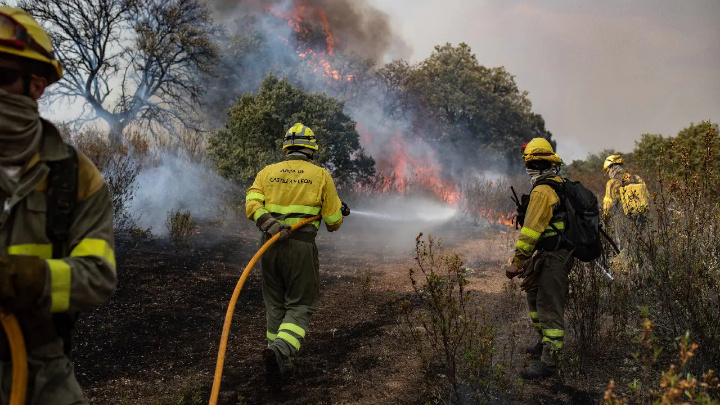 The southwestern Chinese regions of Chonqging and Sichuan were battling fires on Tuesday as they awaited a long-anticipated decline from extremely high temperatures and a period of rainfall set to begin over the next week.

State forecasters said China's heatwave, which has lasted more than two months, was about to hit a "turning point," with a cold front looming from the west and a typhoon approaching in the southeast.

Though China remains on a heat "red alert" for a 12th day, temperatures are expected to fall in parts of central China by Wednesday, and in Sichuan and Chongqing from Aug. 29, the National Meteorological Center said on its official Weibo channel.

Authorities also raised a fire "red alert" late on Tuesday, warning that the situation was "extremely dangerous" in the forest areas of central and southern Chongqing and eastern Sichuan, the official China News Service reported.

Chongqing and Sichuan, where rainfall has been 80% less than during normal years, have had to deal with as many as 19 wildfires since August 14, according to financial news service Caixin, though no casualties have been reported so far.

The provinces of Jiangxi, Hunan and Guizhou are also on high alert for forest and grassland fires, China's Ministry of Emergency Management warned late on Tuesday.

The ministry said it had dispatched more than 2,800 state-level firefighters to Chongqing and Sichuan to help contain the situation.

Farmers in Chongqing have also been installing makeshift irrigation systems to help their crops and working at night to avoid the extreme heat, according to images posted on social media.

The impact of the long drought is expected to last into next month, with autumn harvests at risk, government officials have said.
Dhaka Tribune