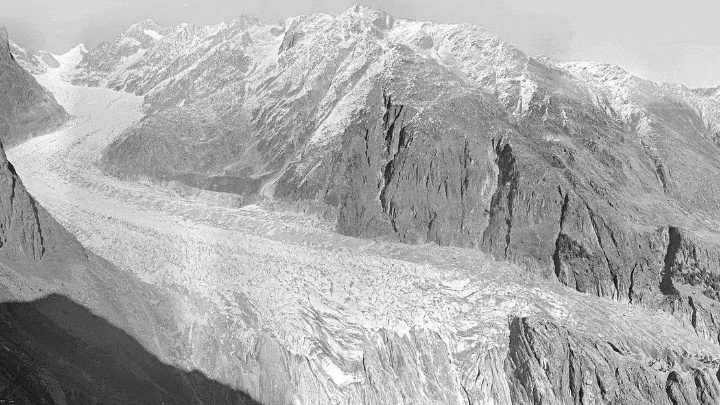 A study on Switzerland's 1,400 glaciers has found that they are losing volume and the process looks to have accelerated over the past few years.

Polytechnic university ETH Zurich and the Swiss Federal Institute on Forest, Snow and Landscape Research announced their findings on Monday based on topographical changes to glaciers since 1931.

Researchers discovered that the volume of ice had shrunk by half over the past 85 years until 2016, and since then glaciers have receded a further 12%.

"Glacier retreat is accelerating. Closely observing this phenomenon and quantifying its historical dimensions is important because it allows us to infer the glaciers' responses to a changing climate,'' said co-author of the study Daniel Farinotti.

How the researchers arrived at their conclusion

Their study, published in the scientific journal The Cryosphere, used material from the TerrA image archive, which covers about 86% of Switzerland's glacierized area, analyzing around 21,700 photographs taken between 1916 and 1947.

For their reconstruction, the glaciologists used so-called stereophotogrammetry — a technique used to determine the nature, shape and position of any object on the basis of image pairs.

"If we know the surface topography of a glacier at two different points in time, we can calculate the difference in ice volume," lead study author Erik Schytt Mannerfelt said.

Not all glaciers have been losing ice at the same rates, the researchers said. Altitude, amounts of debris on the glaciers, and the flatness of a glacier's "snout," its lowest part and the most vulnerable to melting, all affect the speeds of retreat.

The researchers also found that two periods, the 1920s and 1980s, actually experienced sporadic growth in glacier mass, but that was overshadowed by the broader trend of decline.