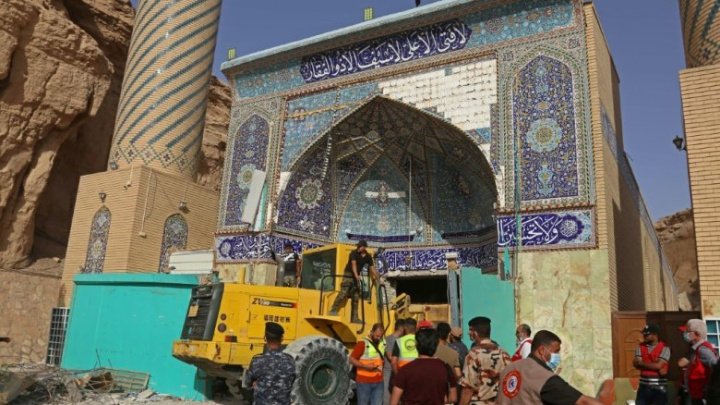 The body of an eighth pilgrim was pulled from an Iraqi shrine on Monday, two days after its partial collapse in a landslide, with rescuers announcing an end to the search for more victims.

The Iraqi civil defence authorities said that the body of a woman had been pulled from the rubble and debris from the shrine known as Qattarat al-Imam Ali near the Shiite holy city of Karbala, bringing the total number of victims to eight.

In all, the bodies of five women, two men and a child had been recovered during 60 hours of rescue operations, which had now been terminated, the authorities said.

The shrine remains closed to the public, they added.

Earlier, Jawdat Abdelrahman, director of the civil defence media department, had told AFP that three children had been rescued and rushed to hospital.

Civil defence spokesman Nawas Sabah Shaker had said on Sunday that between six and eight pilgrims had been reported trapped under the debris of the shrine.

The three children rescued earlier were in "good condition" and being monitored in a hospital, emergency services had said on Sunday.

Search and rescue operations have been carried out since the shrine, which sits at the base of high, bare rock walls, became partially buried when earthen embankments collapsed on Saturday due to saturation from humidity, according to the civil defence.

It is the latest tragedy to befall oil-rich but poverty-stricken Iraq, which is trying to move past decades of war but is hobbled by political paralysis, endemic corruption and other challenges.

Anger has erupted at officials as grieving locals demanded an explanation.

"We want to know what happened, why it happened," said Bassem Khazali, whose nephew was among the victims.

Firebrand Shiite cleric Moqtada Sadr meanwhile railed against "suspected corruption that caused civilian deaths", in a tweet Sunday evening.
But Iraq's Shiite waqf, which is responsible for administering Shiite properties in the country, said in a statement that it did not manage the shrine nor the land on which it was built.

"The shrine does not belong to a known party, but to individuals who have been summoned" for questioning, Karbala governor Nassif al-Khatabi wrote on Facebook, without providing further detail.

Rescuers on Sunday drove a bulldozer through the shrine's entrance, which resembles half a dome ornately decorated with blue tiles covered in Arabic script.

Iraqi President Barham Saleh had called on rescue workers to "mobilise all efforts to save the trapped people", while Caretaker Prime Minister Mustafa al-Kadhemi urged his interior minister to directly supervise operations.

The stricken shrine is dedicated to Imam Ali, the son-in-law of the Prophet Mohammed, who according to Shiite tradition stopped there with his army on his way to a battle in AD 657.

It is located in a natural depression about 25 kilometres (15 miles) west of Karbala, which is the burial place of Imam Hussein, grandson of the Prophet Mohammed.

Shiites view Hussein, who died in battle in AD 680, as the rightful successor to the Prophet Mohammed, the issue at the heart of a schism with Sunni Islam.
BSS