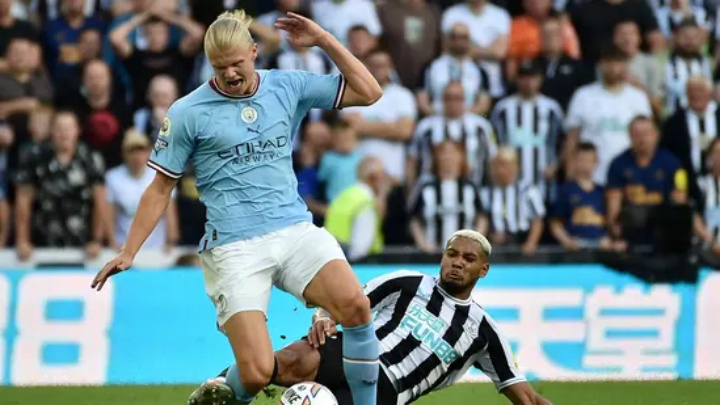 Manchester City staged a thrilling fightback as the Premier League champions rescued a 3-3 draw against Newcastle on Sunday.

Pep Guardiola's side were in danger of a first league defeat since February after falling 3-1 behind in the second half at St James' Park.

But Erling Haaland sparked City's revival with his third goal for the club before Bernardo Silva's equaliser completed the escape act.

While Guardiola will be concerned with the way City were carved open by Newcastle, the spirited comeback underlined why they have won the title four times in the last five seasons.

Newcastle equalised in the 28th minute when Allan Saint-Maximin's pin-point cross was bundled in by Miguel Almiron, with the goal awarded by VAR after an initial offside flag.

Having conceded for the first time in the league this season, City's defence was breached again in the 39th minute.

Saint-Maximin was City's tormentor again with a brilliant run and pass to Callum Wilson, who timed his run perfectly to slot past Ederson.

Kieran Trippier grabbed Newcastle's third goal with a stunning free-kick that whistled into the top corner after 54 minutes.

But Haaland reduced the deficit with a close-range strike from Rodri's flick on the hour.

From the depths of despair, City had a lifeline and Silva seized it four minutes later with a deft finish from Kevin De Bruyne's pass.

Trippier escaped a red card when the right-back was sent off for chopping down De Bruyne, with VAR persuading referee Jarred Gillett to overturn the decision.