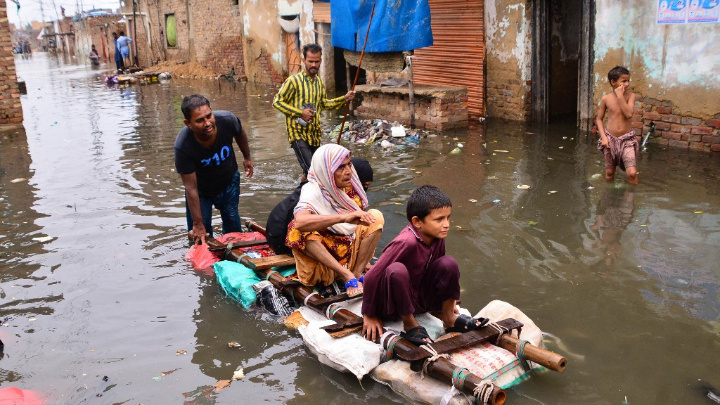 The rains lashed several areas of the eastern Afghan province of Logar, where at least 20 people died and more than 30 others were wounded.

Thousands of homes were destroyed, officials said, along with canals and about 5,000 acres of agricultural land.

A village elder said the flooding was unprecedented in the history of Khushi.

"It destroyed all the people's animals, houses and agricultural land," he said. "People are homeless, they have been forced to take refuge in the mountains."

Footage posted to social media showed bodies of children as well as villages inundated by the waters.

Helicopters used to rescue trapped residents
Officials at the country's National Disaster Management Authority told DPA news agency that they were using helicopters to try to rescue those trapped by the flooding.

"We urgently request the international community... to join hands with the Afghans at this critical time and (to) spare no effort to help the victims," Karimi said in a statement.

Foreign aid and disaster relief have been dramatically reduced since the Taliban stormed back to power in August last year, amid concerns that any assistance could be commandeered by the Islamist group.

The floods come as the country faces a hunger crisis, partly caused by the lack of aid and Western sanctions imposed on the Taliban.

Last week, northern Afghanistan was hit by heavy rains that set off flash floods that killed at least 31 people and left dozens missing.

Pakistan sees heaviest rain in decades
In neighboring Pakistan, at least 36 people were killed by flooding triggered by the heaviest monsoon rains in decades, according to the country's natural disaster management authority.

Rescue workers and the military evacuated thousands of people, officials said. The Balochistan and Sindh provinces have been hardest hit by the flooding

Since June, 618 people have been killed during the unprecedented monsoon season.

The rains and flooding have damaged more than 69,874 houses, leaving thousands homeless and stranded in remote villages, the agency wrote in its latest report.

Scores die every year
The summer monsoon season in both countries runs from July through September and scores of people die every year in the floods and downpours, especially in rural areas due to poor infrastructure and homes.

Decades of conflict and poor infrastructure have left Afghans increasingly vulnerable to natural disasters, according to the United Nations.

Health officials are concerned about the spread of water-borne diseases like cholera, which is endemic and seasonal in the region as many people don't have access to clean drinking water.
Dhaka Tribune