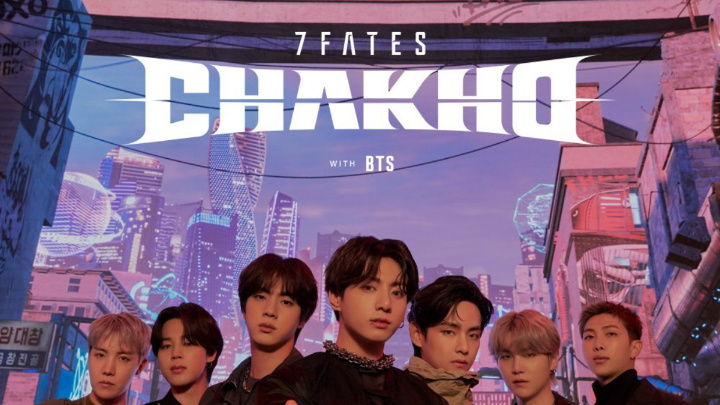 On January 15, 2022, HYBE released a story featuring the members of BTS, titled 7 Fates: Chakho. The urban-fantasy story was launched across Webtoon and Wattpad, and its premise is loosely based on true events.

Less than a century ago, the Korean peninsula was overrun by tigers that used to prowl the streets. The problem had become so severe that professional tiger hunters were deployed to deal with them. These tiger hunters were known as the chakhogapsa, which is where the story gets its name and origins from. In 7 Fates: Chakho, the city of Sin-si has been overrun by monsters known as the beom (the Korean word for tiger). The main plot revolves around seven beom hunters, who are modelled after the members of BTS, as they find themselves bound to each other by fate and band together to face off the monsters.

Both the Webtoon and Wattpad versions tell the same story, but have focus on different narrative parts. The Webtoon version is all about the fast-paced action-packed scenes. The flashy art and the detailed scenes bring the story to life, as does the humorous dialogue sprinkled throughout. The characters feel alive, and three-dimensional, while also laying the groundwork for the conflict brewing in the future. The whole thing does justice to the people that they are based on.

On the other hand, the Wattpad version aims to explore the plot more. It goes in more depth with the actual events, and the world building. Certain events that are glossed over in the Webtoon version are covered in this, and it gives an idea about everyone's individual motivations and characteristics, protagonists and antagonists included. Unfortunately, unlike its Webtoon counterpart, the Wattpad version does not deliver as well. The writing style is a bit clunky, and can be hard to read. Some of the dialogue comes off as awkward as times, and does not flow as well as it does on Webtoon. On top of all that, the Wattpad version is paid, which gives an even less incentive to read it.

Using two different mediums to narrate the same story is a good concept, but it is not executed very well. The most glaring issue is that certain events and character descriptions do not overlap very well, and can even conflict with each other at times. The quality of the Webtoon version outshines that of the Wattpad's by a long shot, and only the first one feels worth the time and energy.

Many people might be turned off from giving it a chance because they might not be a fan of the artists it's based on, but even non-fans of it can enjoy it for what it has to offer. The Webtoon version was on hiatus, and has started posting new episodes on August 19, while the Wattpad version is still getting weekly releases. If anyone is interested in reading it, the Webtoon edition is the best place to start from, but if someone is that dedicated about the story, then they can also pick up the Wattpad version as a complementary work.