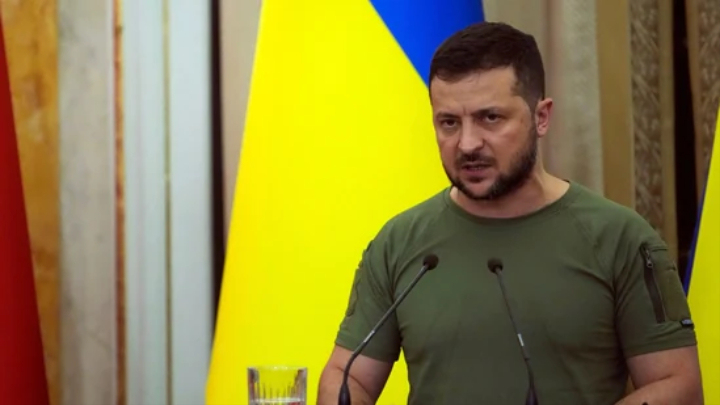 Ahead of Independence Day, Ukraine President Volodymyr Zelensky on Saturday warned the citizens of the war-torn nation that they have to be vigilant in the coming week amid fresh blasts in Crimea and a missile attack near a nuclear power plant that wounded 12 civilians. Ukraine will mark its 31st Independence Day on August 24, even as the country fights nearly six months of a Russian invasion.

Earlier this week, Ukrainian NGO, the Center for Strategic Communications (StratCom) warned that Russia was concentrating missiles and ammunition near its borders with Ukraine, according to a report by the Kyiv Post. “The threat of massive shelling on the territory of Ukraine with S-300 missiles is obvious. Considering the arrival of several trains [from Russia] before Aug. 20, it is clear that the Russians are preparing to attack Ukraine on Aug. 24,” StratCom said on its website and Telegram channel, as per the report.

Earlier this month, StratCom had claimed Russian trains armed with heavy ammunition, including missiles, were headed for the Ukrainian border and set to arrive on Saturday just days before the annual celebrations.

The “increasingly frequent” strikes near nuclear stations, such as at the Pivdennoukrainsk (South Ukraine) nuclear station and fresh shelling near the Zaporizhzhia station, Europe's largest, have revived fears of a nuclear accident, Ukrainian officials said.

Speaking on the series of attacks on Crimea, which was annexed to Russia in 2014, Zelensky said, “You can literally feel Crimea in the air this year, that the occupation there is only temporary and that Ukraine is coming back.”

Tensions are also running high in Ukraine's second largest city Kharkiv where a curfew was imposed and is to be extended for the entire day on Wednesday, regional governor Oleh Synehub had announced, in view of regular Russian shelling.

"Remain at home and take heed of warnings!" Synehub had told residents on the Telegram messaging app.

Russia and Ukraine traded fresh accusations of shelling around the Zaporizhzhia nuclear station, held by Russia since March. Ukrainian authorities have called on the United Nations and other international organisations to force Russian forces to leave the Zaporizhzhia plant.

Talks have been underway for more than a week to arrange for a visit to the plant by the UN nuclear power agency, the International Atomic Energy Agency.
Hindustan Times