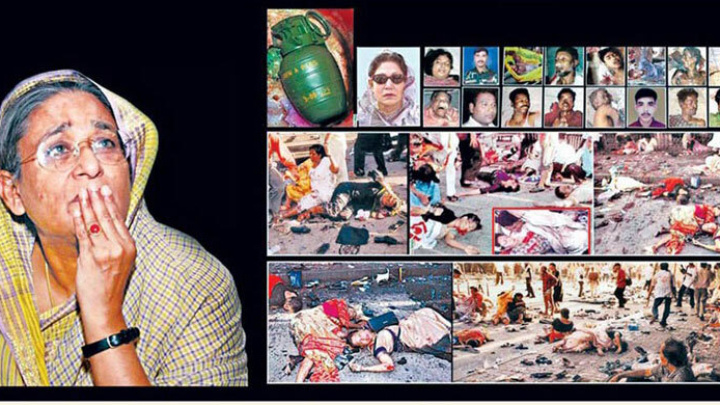 The 18th anniversary of the gruesome grenade attack on an anti-terrorism rally Bangladesh Awami League (AL) organised in the capital on 21 August, 2004, is being marked with heavy hearts on Sunday, reports news agency BSS.

On this day in 2004 during the BNP-Jamaat coalition government, this unprecedented grenade attack was carried out on a peaceful anti-terror rally of the then opposition, Awami League, on Bangabandhu Avenue in the capital.

The party leaders and activists formed a human shield to protect the then opposition leader and incumbent prime minister Sheikh Hasina.

That day, Sheikh Hasina miraculously survived the infernal grenade attack. Seeing that the main target of the assassins Sheikh Hasina survived, 12 rounds were shot at her car. However, the targeted bullets could not penetrate the bulletproof vehicle carrying Bangabandhu's daughter. Immediately after the attack, Sheikh Hasina was cordoned off in a car and taken to her then residence ‘Sudha Sadan’ in Dhanmondi.

But, 24 people including the women affairs secretary of Awami League and wife of late president Zillur Rahman were killed and over 500 others injured in the attack and many of them became crippled for life.

Fear and terror engulfed the entire capital after the grenade attack. Condemnation and grief of this massacre spread across the country and abroad.

After the attack, when the Awami League leaders and activists were busy trying to save themselves and others, the police charged the protest march fiercely with batons and tear shells. At the same time, all traces of the carnage were destroyed.

The BNP-Jamaat coalition government even staged the 'Joj Mia' drama to cover up the incident with state sponsorship and direct support.

Marking the anniversary, the ruling AL, its front and associate bodies and its left-leaning allies, and other political parties, social-cultural and professional organisations have chalked out elaborate programmes across the country, maintaining health guidelines in wake of the Covid-19 situation.

A discussion will be held at 10:30am to recall the victims of the dreadful In memory of those killed in the 21 August grenade attacks. Awami League president and prime minister Sheikh Hasina will preside over it and will deliver a speech.

Prior to that at 10:00am, wreath will be placed at the altar built for the 21 August martyrs in front of the Awami League central office at Bangabandhu Avenue.

AL general secretary and minister of road transport Obaidul Quader called upon the leaders, workers, supporters and well-wishers of Awami League and its allies and fraternal organizations at all levels to observe the Grenade Attack Day on 21 August with due dignity along with the countrymen following the health rules.
Prothom Alo