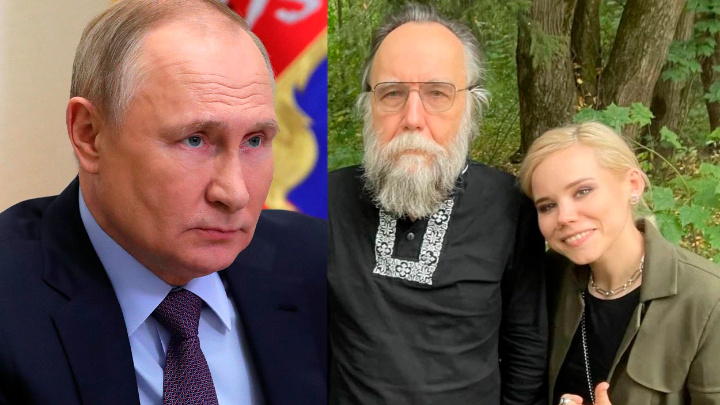 Darya Dugin, the 29-year-old daughter of Russian philosopher Aleksandr Dugin, is believed to have been killed in a car explosion in Moscow, reports claimed. Aleksandr Dugin is known as 'Putin's brain' and has been the man behind Russia's military operations in Ukraine, as was in Crimea. His daughter Darya, a journalist, also supported Moscow's attack on Ukraine. According to Russian media, the father-daughter duo were scheduled to travel back from an event on Saturday evening in the same car but Aleksandr made a last-minute change and travelled in a separate car. Whether the target of the attack was 'Putin's brain' is not yet confirmed, BBC reported.

Unverified videos of the explosion that killed Darya Dugin have surfaced on Telegram showing Aleksandr watching the burning wreck of his daughter's vehicle in shock.

Russian authorities, however, have not confirmed the car explosion and the death of Darya Dugin.

Aleksandr Dugin does not hold any post in Kremlin but because of his closeness with Putin is known as 'Putin's Rasputin'. Darya Dugin was sanctioned by the UK after she was accused of spreading "disinformation" online over the Russia-Ukraine war.

Denis Pushilin, the Russian proxy leader of Ukraine's occupied Donetsk blamed terrorists of the Ukrainian regime for the blast. They (terrorists) had been "trying to liquidate Aleksandr Dugin" but "blew up his daughter", he wrote on Telegram, as reported. “In loving memory of Darya, she is a true Russian girl,” Pushilin wrote.

The fact that Aleksandr changed his vehicle at the last minute is firming up the theory that he might be the target of the explosion which he 'unknowingly' escaped. The explosion took place in Bolshie Vyazemy, on the outskirts of Russia's capital, late on Saturday evening. The duo were guests of honour at the Tradition family festivval at the Zakharovo estate and planned to leave together, reports said. But Aleksandr changed his vehicle while his daughter travelled in her Toyota Land Cruiser Prado -- only to be blown into pieces later.
Hindustan Times