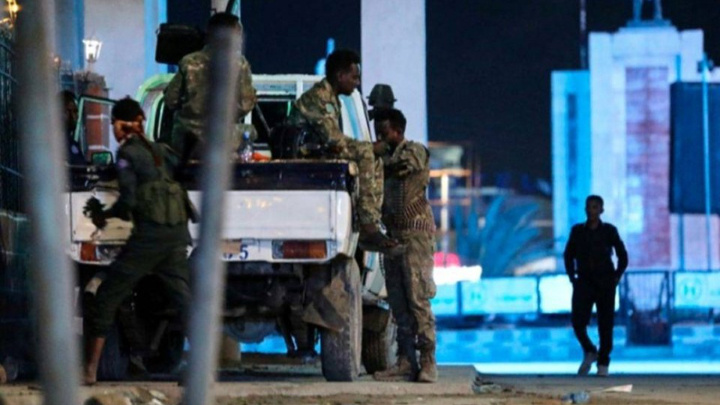 Somali forces have ended a deadly siege by Al-Shabaab jihadists at a hotel in the capital Mogadishu that lasted about 30 hours, a security commander told AFP around midnight Saturday.

At least 13 civilians have been killed and dozens wounded since militants from the Al-Qaeda affiliate unleashed a gun and bomb attack on the popular Hayat Hotel on Friday evening, according to Somali officials.

"The security forces have ended the siege now and the gunmen are dead, we've had no incoming gunfire from the building in the past hour," the commander told AFP on condition of anonymity.

He gave no further information about the total number of civilian or security casualties or how many Al-Shabaab fighters had been killed, saying the government would give a press briefing on Sunday morning.

The building still needed to be cleared of any explosives that may have been planted, he added.

This was the biggest attack in Mogadishu since Somalia's new President Hassan Sheikh Mohamud took office in June and underscores the huge challenge of trying to crush the 15-year insurrection by the Islamist militant group.

The hotel, a popular spot for government officials, has been destroyed after security forces pounded it with heavy weapons late Saturday in a bid to eliminate the assailants who were holed up there for a second straight night.

Witnesses watching the drama unfold from the rooftop of another building said they saw flames tear through the hotel during the bombardment by security forces, with heavy explosions and gunfire reported.

Scores of people were trapped when the assault began and although officials said dozens had been rescued, including children, it is not known how were still inside when the siege ended.

Al-Shabaab, which has carried out numerous deadly attacks in its war against the fragile government in the Horn of Africa nation, has claimed responsibility.

Security official Mohamed Abdikadir had told AFP earlier the number of civilians confirmed to have died was 13, while police officer Ibrahim Duale put the toll at more than 10.

The director of Mogadishu's main trauma hospital, Mohamed Abdirahman Jama, said it was treating at least 40 people wounded in the hotel attack and a separate mortar strike on a seaside area, Hamar Jajab.

"Among those critically wounded are a newlywed bride and her groom and a family of three children, a mother and their father," Hamar Jajab district commissioner Mucawiye Muddey told AFP.

One woman, Hayat Ali, said three young relatives aged between four and seven were found by security forces hiding in a hotel toilet in a state of shock but were later reunited with their family.

Another survivor told AFP he and some colleagues had performed evening prayers before taking tea in one of the hotel's open spaces when they heard the first explosions Friday, the start of the weekend in the mainly Muslim country.

"I managed to run to a nearby exit gate away from the gunmen," Hussein Ali said. "The gunmen started firing and I could hear the shots behind me, but thanks to God... we managed to escape."

Somalia's allies including the United States, Britain and Turkey as well as the UN have strongly condemned the attack, as has ATMIS, the African Union force tasked with helping Somali forces take over primary responsibility for security by the end of 2024.

Witnesses had reported at least two powerful explosions on Friday as gunmen burst into the hotel. Police said the initial blast was caused by a suicide bomber who forced his way into the hotel with other gunmen.

Al-Shabaab spokesman Abdiaziz Abu-Musab told the group's Andalus radio earlier Saturday that its forces were still in control of the building and that they had "inflicted heavy casualties".

In a statement by the group's news agency cited by the SITE Intelligence monitoring group, the jihadists claimed to have held hostages during the siege including government and security officials.

Al-Shabaab has carried out several attacks in Somalia since Mohamud took office and last month launched strikes on the Ethiopia border.

Earlier this week, the United States announced its forces had killed 13 Al-Shabaab operatives in an air strike, the latest since President Joe Biden ordered the re-establishment of a US troop presence in Somalia, reversing a decision by his predecessor Donald Trump.

Mohamud said last month that ending the jihadist insurrection required more than a military approach, but that his government would negotiate with the group only when the time was right.

Al-Shabaab was driven out of Mogadishu in 2011 by AU forces, but still controls swathes of countryside and is able to launch deadly strikes on political, civilian and military targets, with hotels and restaurants often hit.

Robow defected from Al-Shabaab in 2017, with the US government at one point offering a $5 million bounty for his capture.

Somalia has been mired in chaos since the fall of president Siad Barre's military regime in 1991, with civil war and the ascendancy of Al-Shabaab.

The deadliest attack occurred in October 2017 when a truck packed with explosives blew up in Mogadishu, killing 512 people.
Hindustan Times