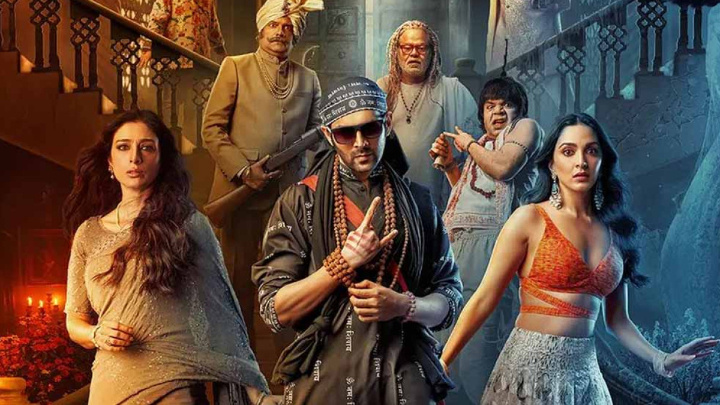 In recent years, Bollywood has seen a splurge of remakes and sequels of movies, most of which have garnered mixed reviews from audiences. While some were able to hit the right spot, others felt repetitive and boring compared to the original.

Kartik Aaryan starrer "Bhool Bhulaiyaa 2" was able to find a happy balance between the two. The movie managed to the bring back the iconic characters with a new cast, almost blurring the line between the sequel and original.

"Bhool Bhulaiyaa 2" is absolutely entertaining, filled with exaggerated horror elements and slapstick humour. The movie is dipped in mystery, with the usual elements of a horror film, filled with evil spirits and a lot of tantra-mantras. While it might not be the best sequel, it certainly leaves its mark and presents a new cast of characters who you will learn to love.

The plot of the film revolves around a haunted house, where a family has become embroiled in black magic. The story begins within the sand dunes of Rajasthan, with the quest to capture the evil spirit of Manjulika. As the spirit is trapped in one corner of the grand mansion, the Thakur family is forced to shift to a new residence. Fast forward a few years, the evil spirit and black magic begins to reappear.

Ahead of making the film, there were many speculations regarding the casting of Kartik Aaryan as the lead. While he could not replace the charm of Akshay Kumar from the original, Aaryan brought his own magic and comedy style to fill the shoes left behind by Akshay Kumar.

Once we set aside the comparisons between the original and the sequel, the audience will be able to witness Kartik Aaryan flourishing in the role. Aaryan's character, Ruhan Randhawa, with all of his rookie black-magic tricks wins hearts both on and off screen.

Kiara Advani, on the other hand, fails to leave an impression, primarily due to her limited screen time. She is not seen doing much, and has very little relevance to the main plot of the film. By the end of the movie, Advani just becomes a medium connecting Ruhan to the Thakur clan.

However, there is someone who outperforms herself in this movie, and that's the queen of versality, Tabu. She simply outshines everyone in the film. Her big and curly locks locked beautifully with beautiful gajras, overdrawn kohl and her general elegance is what makes "Bhool Bhulaiyaa 2" memorable. A perfect fit for the role, Tabu alone makes the movie totally worth watching.

The movie's director, Bazmee also borrows a few characters from the previous film, among them, Rajpal Yadav as Chhote Pandit, is his classic role. He brings with himself a tint of nostalgia connecting the two worlds and does what he is best known for, his own brand of comedy.

For me, the best part has to be Shreya Ghoshal's "Aami Je Tomar" playing in the background. It is as soulful as ever and evokes the right kind of nostalgia when watching the sequel. This, coupled with the mystery, makes the perfect ingredients for what turned out to be one of the biggest blockbusters of this year.

The plot of "Bhool Bhulaiyaa 2" was well-developed and had the necessary depth that a sequel should. What messed things up was the overlap of horror and humour, as these two were sometimes hard to distinguish. While it makes sense in a Bazmee film, I expected more horror elements to be present in the movie. That being said, it was a fun watch and definitely something I would watch again on a lazy weekend afternoon.