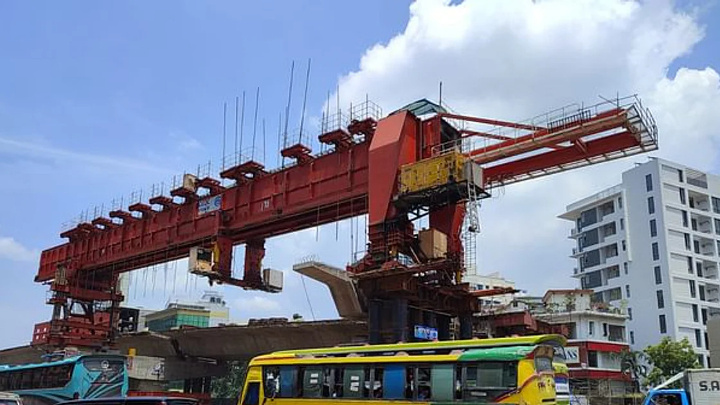 Top project officials met Asian Development Bank (ADB) officials at the latter's office in the capital and made the decision in the afternoon.

After major accidents, suspending project work until a safety review is done is an accepted international standard, said a top BRT official who attended the meeting.

"The ADB asked us to ensure 100 percent safety or to keep the project work suspended," the official said, adding that reviewing the safety measures may take around a week.

"After the meeting, we verbally conveyed the decision to the contractors. Our consultants will formally inform them.

"We will resume work, particularly at the places where safety review would be satisfactory."

However, another top BRT official, who also took part in the meeting, said work would be suspended only in places where there are safety issues.

"All of us -- the financier, project officials and consultants -- agreed that we will resume work at the places in question after ensuring foolproof safety measures," he said.

Both officials requested not to be named.

The development came a day after a segment of a box girder fell on a car at a construction site of the project in the capital's Uttara, killing five people, including two children.

Meanwhile, a government probe committee, led by Neelima Akhter, additional secretary of road transport and highways division, in its preliminary report found that negligence on the part of the Chinese contractor, China Gezhouba Group Co Ltd, led to the tragedy, said ABM Amin Ullah Nuri, secretary of the division, at a press conference at the Secretariat yesterday.

Teague Macreem, the lead supervision consultant for the project, informed the probe committee that no work was supposed to be done on Monday, which was the National Mourning Day, Nuri said, citing the findings.

The contractor is supposed to get a work plan from the consultant a day ahead, but the contractor started working  Monday without the plan, Nuri added.

Such work cannot be done without proper safety arrangements in place, he said, adding, "According to him [Teague Macreem], the accident happened solely because of the negligence of the contractor."

He said the contractor also did not inform the traffic department to manage traffic at the site.

Besides, the crane was operated on an uneven surface, which is why it toppled over, he said.

Citing the contractor, the probe report said the number of vehicles on the road rose sharply in late afternoon, making the crane operator anxious, and he suddenly pushed brake causing the accident, he said.

The committee held the contractor, its safety team and the crane operator, who is now absconding, responsible for the incident, said Nuri.

As per the contract, the contractor can be terminated from the project and it can be blacklisted, which will bar it from working in the country. "We will take action upon receiving final probe report expected early next week."

Probe committee chief Neelima Akhter said the contractor had breached safety rules on several occasions, and the matter should be conveyed to the embassy concerned.

The committee has so far not named any project official responsible for the tragedy that drew widespread condemnation for safety lapse.

Some, however, questioned the appointment of Neelima, who is also the coordinator of the BRT-3 project, as the chief of probe committee.

However, the secretary said, show-cause notices would be issued to all project officials concerned to find out whether there was any negligence when discharging their duties. "We will take action if anyone [of the project officials] is found guilty."

"She is mightily angry. She has ordered a thorough investigation and action against those responsible," he said.

The project is being jointly funded by the government, the ADB, the French Development Agency and the Global Environment Facility.

Although the work stopped after the mayor's visit in the morning, the formal decision to suspend the work for the entire project was made after the meeting with ADB officials.

Contacted, ADB's Dhaka office shared a statement with this newspaper, saying it was working closely with the Roads and Highways Department to ensure appropriate remedial actions and an investigation into the accident.

The international safety standards have been duly included in the contract that the contractor had signed with the RHD, it said.

Besides, a supervision consultant was also engaged to monitor the implementation of safety standards, it added.

Meanwhile, a member of the victims' families yesterday filed a case with Uttara West Police Station against unnamed officials of the Chinese contractor and the crane operator, police said.