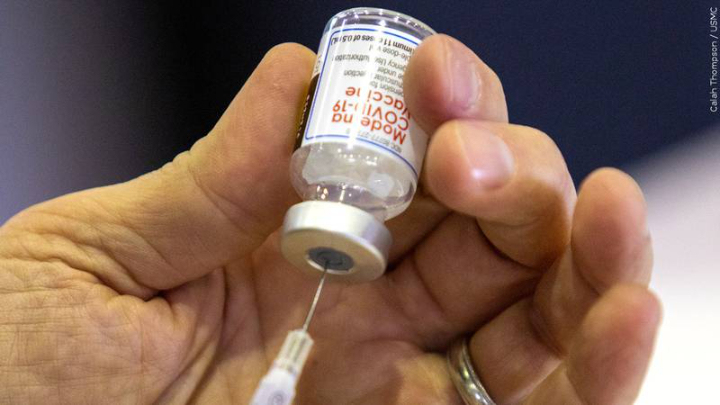 The UK became the first country on Monday to approve a variant-adapted coronavirus vaccine as it cleared Moderna’s so-called bivalent dose that targets the original as well as the Omicron version of the virus.

The UK medicines regulator (MHRA) gave the conditional approval for its use as a booster for adults, after clinical trial data showed the booster triggered “a strong immune response” against both Omicron (BA.1) and the original 2020 virus.

Moderna in June said trial data showed that when given as a fourth dose, the variant-adapted shot raised virus-neutralising antibodies by eight-fold against Omicron.

“The first generation of COVID-19 vaccines being used in the UK continue to provide important protection against the disease and save lives. What this bivalent vaccine gives us is a sharpened tool in our armoury to help protect us against this disease as the virus continues to evolve,” MHRA’s chief executive, Dr June Raine, said, in a statement released by the regulator.

“This represents the first authorisation of an Omicron-containing bivalent vaccine… mRNA-1273.214 has consistently shown superior breadth of immune response over mRNA-1273 in clinical trials,” said Stéphane Bancel, chief executive of Moderna, in a statement released by the company.

In December 2020, UK’s MHRA was the first regulator to approve a coronavirus vaccine in the world, which at the time was Moderna’s original dose.

According to Moderna, trial data showed its variant-adapted booster generated virus-neutralising antibody levels against the subvariants that were 1.69 times higher than those given the original booster.

While correlation between neutralising antibody levels and vaccine effectiveness against disease is not straightforward, it generally serves as an indicator.

Signs that a vaccine update may be inevitable first became clear when research into the Omicron variant began pouring in, showing the new version of the virus significantly cheated antibodies created using vaccines designed on the Wuhan-origin virus.

Moderna’s vaccines are based on a platform known as mRNA, which is quicker to engineer and redesign than other platforms that are based on an inactivated virus (like Bharat Biotech’s Covaxin), a vector virus (like AstraZeneca’s AZD1222), or on a protein (like Novavax’s Nuvaxovid).

News agency Reuters reported that European Medicines Agency (EMA) officials expect a variant-adapted vaccine to be approved in the European Union by September, and have signalled the regulator is open to using shots targeting the older BA.1 variant this autumn, given those specifically targeting newer subvariants are further behind in clinical development.

In contrast, the US Food and Drug Administration has said it will seek the specific inclusion of the newer BA.4 and BA.5 offshoots of Omicron in any new shots used domestically.
Hindustan Times