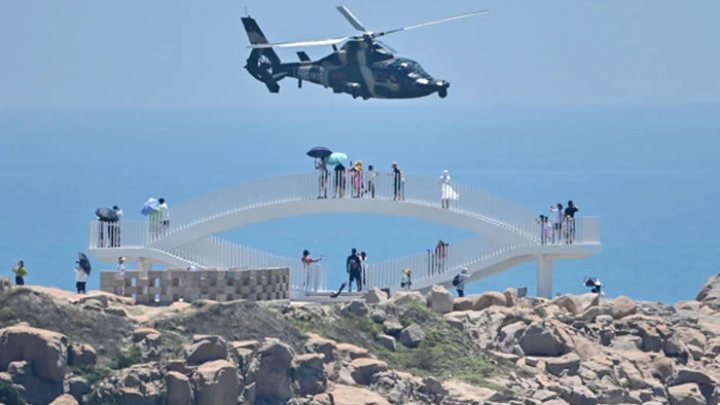 The unannounced two-day trip by senior members of Congress prompted China to renew its rhetoric that it would "prepare for war" over Taiwan, a self-ruled democracy that Beijing's leaders claim and have vowed to one day seize.

"The delegation had an opportunity to exchange views with Taiwan counterparts on a wide range of issues of importance to both the United States and Taiwan," it said.

Tsai told the lawmakers she wants "to maintain a stable status quo across the Taiwan Strait" and "jointly maintain the prosperity and stability of the Indo-Pacific region", her office said in a statement.

She said Russia's invasion of Ukraine demonstrated "the threat that authoritarian states pose to the world order", according to her office, and also thanked Washington for its support in the face of Chinese military threats.

The bipartisan trip sparked another bellicose response from Beijing, which said it had carried out a fresh round of "combat readiness patrol and combat drills in the sea and airspace around Taiwan island" yesterday.

"We warn the US and the DPP authorities: 'Using Taiwan to contain China' is doomed to failure," he added, referring to Taiwan's ruling Democratic Progressive Party.

In a defiant response, Taiwan's defence ministry vowed to face the latest drills "calmly and seriously and defend national security".

"Apart from expressing condemnation (of China's drills), the Ministry of National Defence will comprehensively grasp the movements in the sea and airspace around the Taiwan Strait," the ministry said.

It added that its forces had detected 30 Chinese planes and five ships operating around the strait yesterday. Of those, 15 planes crossed the median line -- an unofficial demarcation that Beijing does not recognise.

Yesterday's drills followed days of huge exercises around Taiwan in the wake of Pelosi's visit, which saw Beijing send warships, missiles and jets into the waters and skies near the island.

Taipei condemned those drills and missile tests as preparation for an invasion.

China's Communist Party has never ruled Taiwan but says it will use force if necessary to take the island and bristles at any perceived treatment of it as a sovereign nation state.

That decades-old threat was reiterated in a white paper published last week, when China's Taiwan Affairs Office said it would "not renounce the use of force" against its neighbour and reserved "the option of taking all necessary measures".