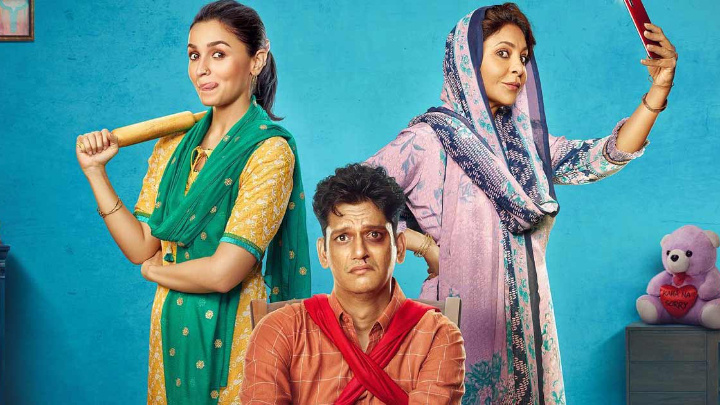 Described as a dark comedy-drama, ''Darlings'' follows the tale of a mother-daughter duo as they struggle to find their place in Mumbai—seeking bravery and love in unusual situations, all the while overcoming a myriad of obstacles.

The plot of the film revolves around the theme of domestic violence—within the socio-psychological context of the lower-middle-class. Unlike ''Thappad'', ''Darlings'', while not a tight slap to the patriarchy, addresses the consequences of the patriarchy through several cinematic themes.

The film has been directed by debutant Jasmeet K Reen and co-written by Parveez Sheikh. As a result, the movie feels fresh and is a usual story captured through unusual cinematography. The film features Alia Bhatt and Shefali Shah as the mother-daughter duo, surviving the atrocities of violence at home. It also stars Vijay Varma and Roshan Mathew in prominent roles.

Badrunissa (Alia) is in love with roadside romeo Hamza (Vijay). Behind the facade of their perfect marriage, there is the dark reality of domestic violence, as Hamza loses his temper time and again, hitting his wife in the process. Badru tries her best to reconcile with Hamza, but when things get out of hand, she teams up with her mother to teach him an important lesson. It does not feel like a story of revenge, rather a reversal of roles to put Hamza in Badru's shoes.

"Darlings" perfectly explores the normalisation of abuse in several households. A scene in particular that highlights this, is when Badru cooks for Hamza in the morning, even though he severely beat her up the previous night. Hamza apologises to Badru, and she happily forgives him, thus continuing the cycle of violence.

In contrast to the trailer, ''Darlings'' is not an ideal example of a dark comedy or a twisted suspenseful thriller. The story is narrated in a pretty straightforward manner and at times feels too slow. It could, in fact, also come across to be triggering and hard to watch for many people.

The movie, keeps spinning in circles, turning it into a tedious drama rather than a suspenseful thriller. Shefali and Alia clearly steal the show, through their exceptional performances and chemistry—making up for the occasional slowing of pace.

Whether it's heart breaking moments or the humorous ones, the friendship between the mother and daughter is what sets the tone for this movie. The duo seamlessly draw strength from one another's enthusiasm as performers, and captivate the viewers.

Vijay also excels in the unconventional character of a man with psychopathic tendencies. In most respects, he presents himself as a perfectly amiable man. He transitions between his good and bad side with minimal efforts, adding to the Jekyll and Hyde dynamic of his character.

The final message of "Darlings", is women being empowered by the message that they can choose to not see themselves as victims, despite being let down by the men in their lives. While "Darlings" might not be the best dark comedy out there, it is still worth watching, especially if you enjoy stories that are centred around empowered women.