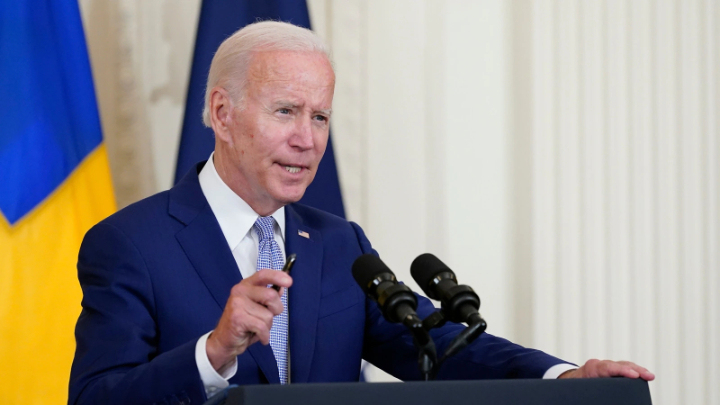 US President Joe Biden expressed shock over the "vicious attack" on Salman Rushdie and said that he pray for his health and recovery.

"Jill and I were shocked and saddened to learn of the vicious attack on Salman Rushdie yesterday in New York. We, together with all Americans and people around the world, are praying for his health and recovery. I am grateful to the first responders and the brave individuals who jumped into action to render aid to Rushdie and subdue the attacker," Joe Biden said in a statement.

While praising Rushdie, Biden said that the author's insight into humanity, his unmatched sense for the story, and his refusal to be intimidated or silenced--stand for essential, universal ideals. Truth. Courage. Resilience.

"The ability to share ideas without fear. These are the building blocks of any free and open society. And today, we reaffirm our commitment to those deeply American values in solidarity with Rushdie and all those who stand for freedom of expression," the statement added.

White House termed the attack on Salman Rushdie as "appalling" and said that the Joe Biden-Kamala Harris Administration is praying for a speedy recovery of the renowned author.

Meanwhile, in the latest development in Rushdie's case, Hadi Matar, who is suspected of stabbing an Indian-born-British author in western New York State on Friday morning during a lecture, pleaded not guilty to attempted murder in the second degree and other charges in a New York court.

Matar was arraigned in centralized arraignment on Saturday and was remanded without bail at Chautauqua County Jail.

According to Nathaniel Barone, his public defender said that Matar pleaded not guilty, CNN reported.

It said the author suffered an apparent stab wound to the neck and was transported by helicopter to an area hospital. A suspect has been taken into custody.

The seventy-five-year-old author caught the limelight for his novel 'Midnight's Children' in 1981.His 1988 book 'The Satanic Verses' led to a fatwa, a religious decree, by the then Iranian revolutionary leader Ayatollah Ruhollah Khomeini. The threat forced him into hiding for several years.

The attack on Rushdie has drawn wide international condemnation.

"Appalled that Sir Salman Rushdie has been stabbed while exercising a right we should never cease to defend. Right now my thoughts are with his loved ones. We are all hoping he is okay," UK Prime Minister Boris Johnson said in a tweet.

UK Home Secretary Priti Patel said she was shocked and appalled to hear of the unprovoked and senseless attack on Sir Salman Rushdie.

“Freedom of expression is a value we hold dear and attempts to undermine it must not be tolerated. My thoughts are with Sir Salman and his family.”
Hindustan Times