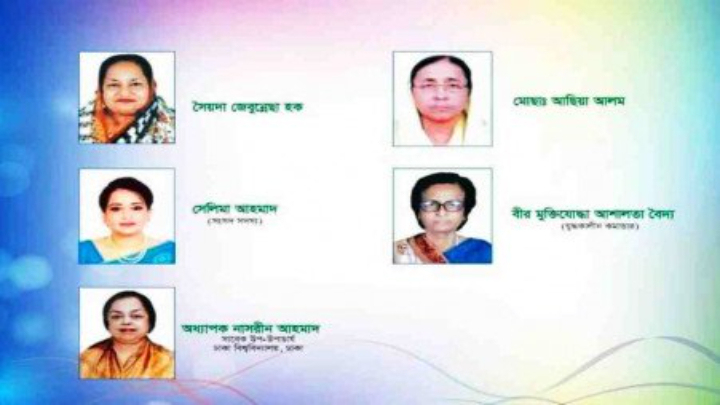 She virtually joined the award distribution ceremony as the chief guest from her official residence Ganabhaban.

Ministry of Women and Cultural Affairs organized the function at the Osmani Memorial Auditorium in Dhaka.

On behalf of the Padak recipients, Syeda Zebunnesa Haque spoke at the ceremony expressing her feelings.

A documentary on the life and works of Bangamata Sheikh Fazilatunnesa Mujib Renu, mother of Prime Minister Sheikh Hasina, was also screened at the function.

Bangamata was born on August 8 in 1930 at Tungipara village in Gopalganj. She was killed brutally along with Father of the Nation Bangabandhu Sheikh Mujibur Rahman and most of his family members on the night of August 15 in 1975.

The birthday of Bangamata is being observed across the country in a befitting manner.

Alongside the government, various political and socio-cultural organizations have chalked out elaborate programs that included discussions to observe the day.

Wreaths were placed at her grave in the city's Banani area Monday morning.

State-owned Bangladesh Television and Bangladesh Betar in addition to other electronic media are broadcasting special programs to mark the day.

Marking the birth anniversary of Bangamata, financial assistance of Tk50,00,000 lakh is being distributed among 2,500 insolvent women.

Of the total amount, Tk130,000 is being distributed among the women of flood-hit districts, Sylhet, Sunamganj, Moulvibazar, Habiganj and Netrokona.

Besides, a total of 4,500 sewing machines are being distributed across the country.