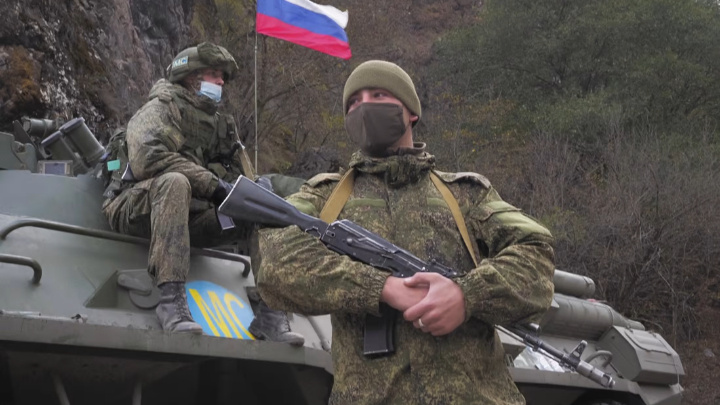 New tensions erupted over Nagorno-Karabakh on Wednesday as three soldiers were killed and Azerbaijan said it had taken control of several strategic heights in the disputed region.

The escalation drew immediate international rebuke, with Russia accusing Baku of violating the brittle ceasefire and the European Union urging an "immediate cessation of hostilities."

Arch enemies Armenia and Azerbaijan fought two wars -- in 2020 and in the 1990s -- over Azerbaijan's Armenian-populated region of Nagorno-Karabakh.

In the aftermath of the latest war, Armenia was forced to cede swathes of territory it had controlled for decades, and Russia deployed some 2,000 peacekeepers to oversee a fragile truce, but tensions persist despite a ceasefire agreement.On Wednesday, new tensions flared as Azerbaijan said it had lost a soldier and the Karabakh army said two of its troops had been killed and more than a dozen injured.

The Azerbaijani defence ministry said Karabakh troops targeted its army positions in the district of Lachin, which is under the supervision of the Russian peacekeeping force, killing an Azerbaijani conscript.

The Azerbaijani army later said it conducted an operation dubbed "Revenge" in response and took control of several strategic heights in Karabakh.

The army of the breakaway statelet for its part accused Azerbaijan of violating a ceasefire and killing two soldiers and wounding another 14.Karabakh declared a "partial mobilization," the army said in a statement.

Armenia called on the international community to help stop Azerbaijan's "aggressive actions" after the flare-up.

"Azerbaijan continues its policy of terror against the population of Nagorno-Karabakh," the foreign ministry said.Armenia accused Azerbaijan of seeking to make unilateral changes over the Lachin corridor that links Armenia and Karabakh.

Russia accused Azerbaijan of breaking the ceasefire and vowed to stabilize the situation.

"The ceasefire regime was violated by the armed forces of Azerbaijan around the Saribaba height," the Russian defence ministry said in a statement.

"The command of the Russian peacekeeping force, with representatives of Azerbaijan and Armenia, are taking measures to stabilize the situation."

The European Union called for an "immediate cessation of hostilities" between Azerbaijani and Armenian forces in Karabakh.

"It is essential to de-escalate, fully respect the ceasefire and return to the negotiating table to seek negotiated solutions," EU foreign policy chief Josep Borrell's spokesman said in a statement.

"The European Union remains committed to help overcome tensions and continue its engagement towards sustainable peace and stability in the South Caucasus," he added.

In his statement, he also called for "a negotiated, comprehensive, and sustainable settlement of all remaining issues" tied to the conflict.

Following Russia's intervention in Ukraine on February 24, an increasingly isolated Moscow lost its status as the primary mediator in the Karabakh conflict.

Six weeks of fighting in the autumn of 2020 claimed more than 6,500 lives and ended with a Russian-brokered ceasefire agreement.

In July, Azerbaijan began the process of returning its people to land recaptured from Armenian separatists in what Baku calls "The Great Return."

The oil-rich country has vowed to repopulate the recaptured lands.

President Ilham Aliyev had for years promised to recapture lands lost in the 1990s and the first returns marked a symbolic moment for Azerbaijan.