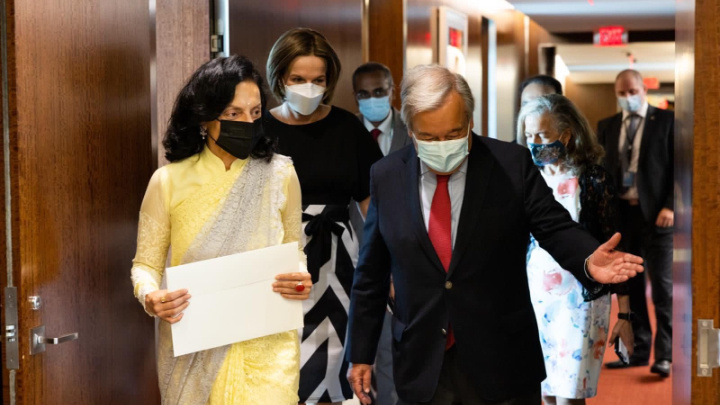 Ambassador Ruchira Kamboj presented her credentials to United Nations Secretary-General Antonio Guterres on Tuesday as she took charge as India's permanent representative to the United Nations, the country's first female envoy at the organization’s headquarters in New York.

Kamboj, 58, was previously ambassador of India to Bhutan and was appointed India's permanent representative to the United Nations in New York in June, succeeding Ambassador TS Tirumurti, NDTV reported on Wednesday.

"Today, I have presented my credentials to the Secretary General of the United Nations @antonioguterres as Permanent Representative/Ambassador to the @UN. A privilege to be the first Indian woman to be given the honour to hold this position. To the girls out there, we all can make it!" she tweeted.

India's tenure at the Council will end in December when the country will also preside as president of the UN organization for the month.

Kamboj previously served as a counsellor at India's Permanent Mission to the UN in New York from 2002-2005.

She was the all-India women's topper of the 1987 Civil Services batch and the topper of the foreign service batch of that year. She began her diplomatic journey in Paris, where she was posted as the third secretary at the Indian Embassy in France from 1989-1991.

From Paris, she returned to Delhi where she worked as under secretary in the Europe West Division of the Ministry of External Affairs from 1991-96. From 1996-1999, she served in Mauritius as first secretary (economic and commercial) and head of chancery at the Indian High Commission in Port Louis.

Ruchira served as the high commissioner of India to South Africa, with concurrent accreditation to the Kingdom of Lesotho from July, 2017 to March, 2019. She assumed charge as Indian envoy to Bhutan on 17 May, 2019.