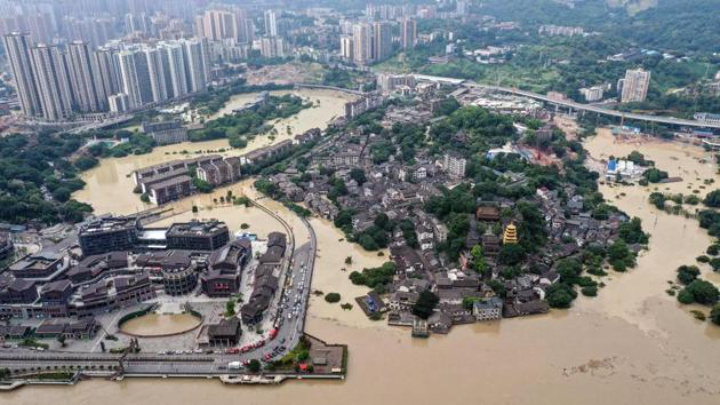 Torrential rains continued to batter several parts of southern China on Tuesday, worsening the flood situation, pushing swollen rivers to overflow banks, triggering landslides and forcing the evacuation of hundreds of thousands of people across provinces.

The heaviest rainfall in decades and the resulting floods have so far killed over 50 people while more are missing besides inundating homes and buildings and destroying crops.

The continuous downpours in the Pearl River basin, a manufacturing and trade hub, in south China have stretched emergency workers, hit manufacturing, stalled logistics in a year when supply chains are already stressed because of Covid-19-related restrictions.

Recent downpours in the Pearl River basin have led to the continuous rise of water levels of its main rivers, including the Xijiang and Beijiang rivers.

“Some parts in (the province of) Guangdong and Guangxi (autonomous region) will also be highly prone to mountain torrents and other disasters,” official news agency Xinhua reported.

The average rainfall in the provinces of Guangdong, Fujian and Guangxi between early May and the middle of June reached 621mm, the highest since 1961, China’s National Meteorological Centre said.

Jiangxi province’s Shaoguan city, where average rainfall since late May has breached historical records, raised the flood alert to “Level I”, the highest in China’s four-tier system of flood alert.

State-run television, which has telecast footage of vehicles including a fire truck being washed away in flood torrents, reported that local authorities asked Shaoguan residents living along riverbanks and low-lying houses to relocate to higher ground after floodwaters hit a 50-year high.

According to one estimate, China suffered the world’s second-worst losses from floods in 2021 at about $25 billion, behind Europe’s $41.8 billion of damage.

The emergency funds will be used to support flood-control and disaster-relief efforts in the provinces of Fujian, Jiangxi and Hunan, as well as the Guangxi Zhuang Autonomous Region, an official statement said.