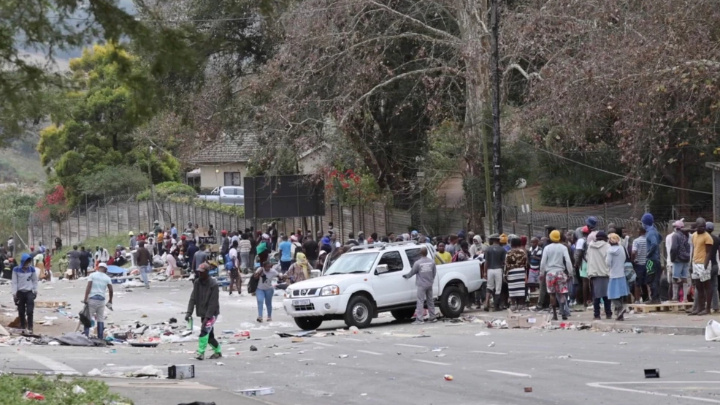 At least four people were killed during protests over the cost of electricity in a South African township on Monday, police officials said.

Residents angry at the high cost of basic services barricaded roads with burning tyres and set ablaze a municipal building in Thembisa township northeast of the financial hub Johannesburg.

Authorities said two people were killed in alleged police shootings after the protests broke out in the morning.

Later in the evening Thepa said two more bodies had been found near the entrance of the burnt building - bringing the total death toll to four.

Stones are strewn along a main street as people gather outside the Tembisa Customer Care Centre after protesters set it on fire after a night of riots caused by angry community members demanding better service delivery in Tembisa on August 1, 2022 AFP

Police were yet to confirm what caused the deaths, she added. Investigations were under way.

Protests over poor services occur regularly in South Africa, which is battling some of the highest unemployment and crime rates in the world.

The latest bout of protests came after former president Thabo Mbeki warned the country could see an uprising similar to the Arab Spring, triggered by mounting discontent.

Mbeki last month accused his successor Cyril Ramaphosa of failing to deliver on his promises to tackle widespread poverty, inequality and unemployment, which stands at over 34.5% with youth joblessness at nearly 64%.

A year ago South Africa saw an outbreak of the worst violence the country has experienced since the end of the apartheid era three decades ago. The large-scale rioting and looting then left more than 350 dead.