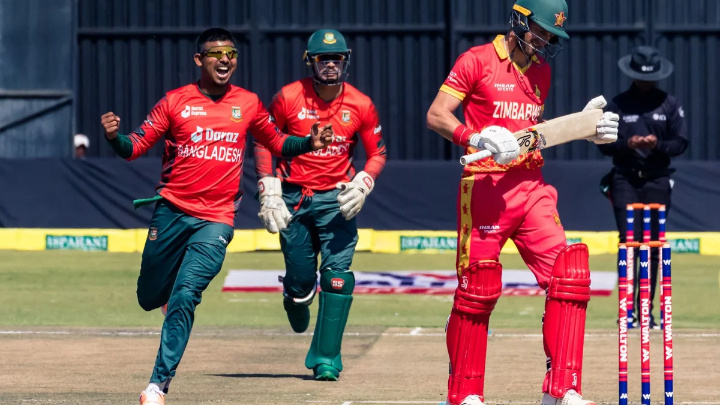 An upbeat Bangladesh is now determined to come all guns blazing in the third and final T20 International against Zimbabwe tomorrow (Tuesday) in a bid to seal the series and continue their dominance over the African opponents.

The match which starts at 5 PM (Bangladesh Time) will be aired live on T Sports Channel from the Harare Sports Club.

Bangladesh's confidence stemmed from their clinical performance in the second match, which they won by seven wickets. A team without their any senior player was put in troublesome situation after losing the first game by 17 runs but the second game proved Bangladesh are still capable enough to beat Zimbabwe in any condition.

The first T20's loss came with some dangerous sign as Zimbabwe batters, specially Sikandar Raza and Wessly Madhevere cut through Bangladeshi bowling line up in emphatic manner to compile 205-3. Bangladesh's bowling attack which comprised with their first choice bowlers-Mustafizur Rahman, Shoriful Islam, Taskin Ahmed and Nasum Ahmed were severely beaten up by the Zimbabwe duo that made the fans shivering down the spine.

However Bangladesh recovered from that loss, specially with their spin trick as Mosaddek Hossain Saikat's wily off-spin played a vital role in toning down a Zimbabwe surge.

Saikat became the only fourth Bangladeshi bowler to claim a five-wicket haul in T20 International cricket, helping the side to restrict Zimbabwe for 135-8. Thanks to Liton Das's 33 ball-56 Bangladesh chased the target down with 15 balls remaining.

So ahead of third and final ODI, which turned out to be decided, Bangladesh looked to play the spin card again well. But what would disturb their rhythm is the absence of captain Nurul Hasan Sohan who was ruled out of the reminder of the Zimbabwe series with finger injury.

It is learnt Mosaddek Hossain Saikat and Liton Das will be picked up to lead the side in his absence.

However even without Sohan, Bangladesh are capable enough to seal the series.

"We are hopeful that we can win the third game too to win the series," said Mosaddek who was adjudged man of the match for his 5-20 in the second T20.

"It is actually my second five-for in T20 cricket but I can't remember when I got the first five-for. However the second five-for will not be faded away. When I bowled, I didn't think that I am a part time bowler, rather I love to deem myself as regular bowler. When the captain gave me the ball in the second game, I was just thinking to tie them down and be as economical as I can be. That worked well as they charged me and gave the wickets."

Bangladesh however won 12 matches and lost six in the last 18 encounters between the two sides in this format. And to extend the number of victory, they need to have a forced change in the third T20 as Sohan was ruled out. There is chance that young Parvez Hossain Emon who is the fastest T20 centurion by a Bangladeshi batter could make his debut. Liton Das would keep the wicket in the place of Sohan.