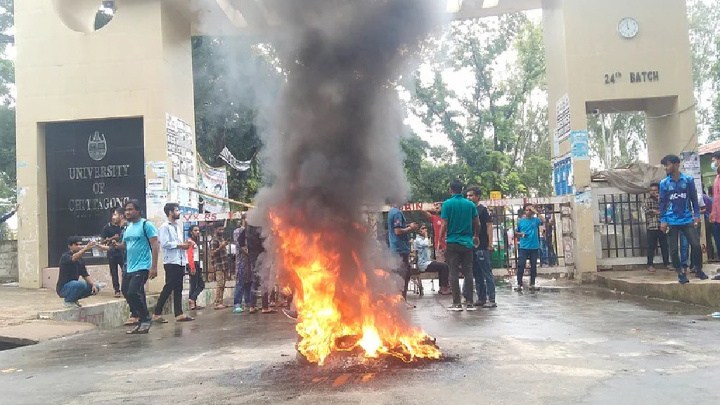 A faction of Bangladesh Chhatro League’s (BCL) Chittagong University unit on Monday enforced a blockade on the campus following the announcement of the full committee of the unit.

BCL activists, who didn't get any posts in the new committee, enforced the blockade programme, halting classes and exams at the university.

Following the announcement of the CU unit Chhatra League committee on Sunday night, the leaders and activists got agitated and demanded reformation of the committee.

The agitated students also demanded the removal of Mohammad Ilyas from the post of joint general secretary of the committee alleging him to be a drug dealer.

Shayan Das Gupta, who got the post of vice-president in the new committee, said those who were involved in BCL politics from the beginning have been deprived.

BCL leader Dolowar Hossain, who didn’t get the post, said the committee has been announced depriving the qualified and dedicated BCL activists.

The shuttle train service also came to a halt due to the alleged abduction of three people including the locomaster.

Meanwhile, the railway authorities refused to operate shuttle trains due to security concerns.

Sholoshohor station master Tanmoy Chowdhury said no train left for the university due to the blockade. “Also three people including a loco master and a guard were abducted from Jhautola railway station.”

The full committee of the CU unit of BCL was announced after three years on Sunday.
Dhaka Tribune